Love, love me do 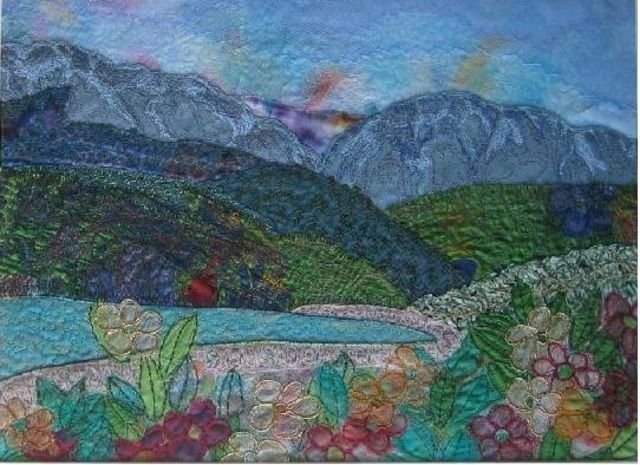 The embroidery is of an alpine landscape merged with a coastal scene.

A marriage has its ups and downs. The snow covered mountains represent the difficult times that have been overcome by the love in the relationship.

Life is constantly changing and bringing with it new adventures. The tree covered hills are covered by three different types of tree – just three of adventures from the past 40 years.

The lower slopes are of a gentle meadow representing the times when things run smoothly.

The sky has hints of a storm, as well as the promise of a good day to come.

The lake has a path around it, rather like the coastal paths of Cornwall. Written into the path are the words of a Beatles' song 'Love, love me do, you know I love you' - a song from the sixties, whose words are as true now as they were 40 years ago.

The foreground is a garden of flowers, inspired by Beethoven's Symphony no.6. The Pastoral Symphony was inspired by the beauty Beethoven saw in nature. He would often go on long walks in the countryside. Three of the movements are called: Awakening of Cheerful Feelings Upon Arrival in the Country; Scene by the Brook; Thunderstorm, all of which can be seen in the embroidery.

Nature and wildlife in general has always been of great interest. The flowers and variety of trees gives is a token of the flora seen and enjoyed over the years. Hidden in the wood to the middle left of the embroidery are a fish and the tracks of roe deer, badgers.